Reaching out with Twinkle

Reaching out with Twinkle

Since our launch back in February at the Royal Astronomical Society, members of the Twinkle team have been hard at work trying to spread information about the purpose and scope of our mission to a wider audience. There are a lot of different groups of people out there that we would like to engage with Twinkle, such as schools, the general public, teachers, space industry, scientists, policy makers, amateurs… and many more. That means that we’ve had to attend a lot of different types of event, all around the UK, to spread the word!

The ‘Your Universe’ Festival, hosted at UCL in London, was aimed at school children primarily, but was also open to their families and to the general public as well. This was our first chance to try out ideas to interactively show some of the science behind Twinkle. Everyone involved in Twinkle, from the management team to our crew of PhD student volunteers took a turn on the stand – including yours truly. Activities included card games to find out which exoplanets are habitable from the planet’s physical qualities and using hand-held spectroscopes to explain how splitting light (or infrared) into rainbows can tell us about an exoplanet’s atmospheric composition.

We had a chance to follow up on this a few weeks later at the ‘Not Just an Astronaut’ schools event hosted by our consortium member, Rutherford Appleton Laboratory in Oxfordshire. This time our education officer, Clara Sousa Silva, took the lead in running spectroscopy workshops and debates on the ethics of planetary exploration with school groups.

At the Summer Science Exhibition we were a part of the ‘Origins of Life’ exhibit, looking to communicate with members of the public, as well as other scientists and policy makers. Here we wanted to demonstrate how infrared spectroscopy could be used to identify planets that might be capable of maintaining life. We were alongside stalls explaining deep sea hydrothermal vents to show how life might have originated on our own planet. We used model exoplanet systems as well as our mini spectroscopes to explain how the Twinkle mission will work.

The National Astronomy Meeting is a scientific conference, and therefore the main audience were academics within the field of space science and astronomy. Here Marcell Tessenyi, our project manager, gave a talk about the logistics of the mission, as well as the mission’s scientific aims and technical progress. Anita Heward, our outreach officer, presented Twinkle’s outreach plans during a session on astronomy outreach and public engagement in the 21st Century. Marcell and Doug Liddle, representing Surrey Satellite Technology Ltd, also gave presentations at the UK Space Conference in Liverpool, which this year attracted more than 1000 representatives of the space community.

This is far from all of the outreach and engagement work we have done so far. EduTwinkle is now up and running, with a summer school held in July and at least 15 talks to schools by Twinkle scientists over the last few months. We are planning various other outreach activities up and down the country. If you want to come along to one of these events, then keep up with us via Twitter, or sign up to our newsletter to find out about activities as soon as we announce them! 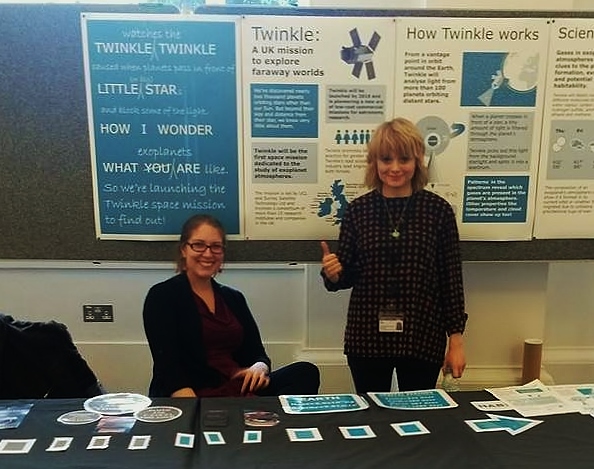